This article is part of a series of posts exploring the lost Art Deco cinemas of Queensland. See also: Brisbane’s Metro Theatre and Earl’s Court, Rockhampton 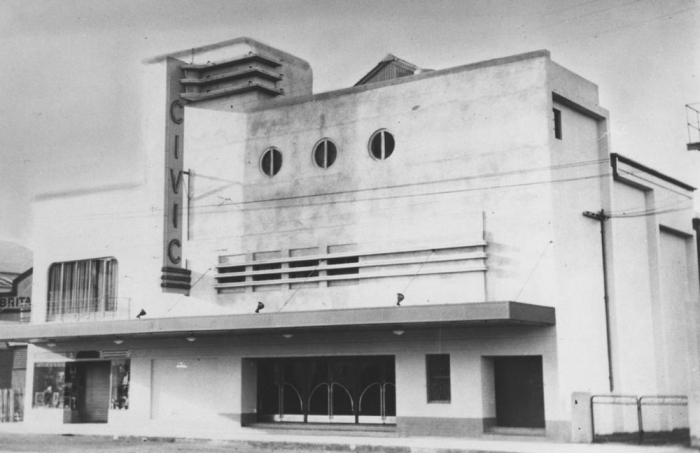 Mackay boasts one of the largest concentrations of Art Deco architecture in Queensland. After a devastating cyclone in 1918 much of the city was rebuilt in the Art Deco style, chosen for its association with “progress”. The Civic Theatre became a celebrated addition to this burgeoning modern landscape.

The cinema was built in 1940 by the Taylor family who were leading theatre proprietors in Mackay for more than six decades. They purportedly spent “a huge sum of money” on the project, regarding it a monument to their family’s legacy. To fulfil their ambition for a theatre that would rival any in the Commonwealth, they contracted Sydney firm Crick and Furse to design the Civic in collaboration with Mackay architect, Harold Brown. 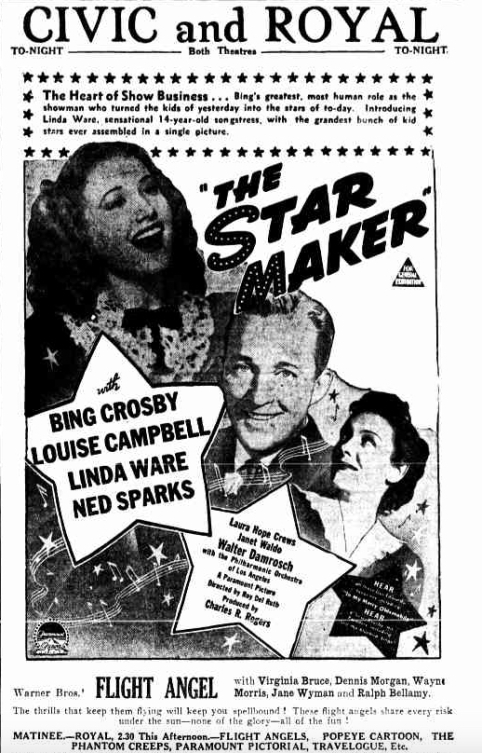 Crick and Furse were the pre-eminent designers of Art Deco cinemas in the country; according to architectural historian, Ross Thorne, “their influence on cinema building in Australia is immeasurable. The theatres they created represented all that was considered to be modern and comfortable.” Among the 80 they built or remodelled during their partnership were the prolific Kings chain of theatres, the Minerva (later Metro) in Sydney, the West Olympia in Adelaide, and – in Queensland – Ipswich’s Ritz Theatre and Cairns’ Tropical Theatre (below). After the partnership dissolved around 1940, Crick went on to design other beloved landmarks in Queensland including Brisbane’s modernist Festival Hall (1959). 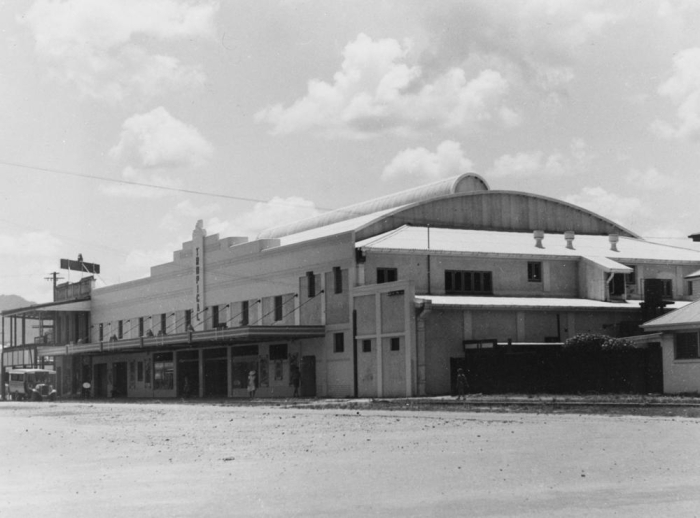 Mackay’s Civic Theatre was built in the streamlined moderne style of Art Deco, characterised by its asymmetrical concrete facade emphasising horizontal lines, as well as rounded porthole windows which paid tribute to the great ocean liners signifying luxury and leisure in the modern era. When the cinema first materialised on the Gordon Street horizon, the local newspaper hailed it “an imposing sight, as it rears its ornate head over the surrounding buildings.” 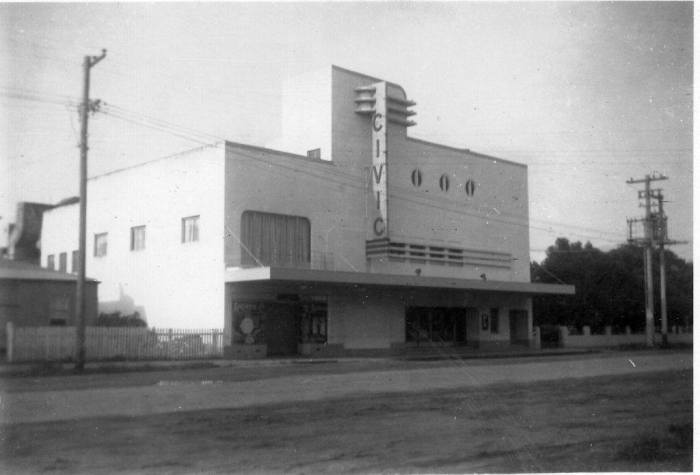 The 1100-seat cinema was described as a template of “refinement, comfort and modernity”, with plate-glass doors, sliver ash panelling, soft pastel colours, mirrored columns, padded lounge chairs, and deep pile carpet supplied by Grace Bros in Sydney. Features considered particularly novel for a regional cinema included air conditioning, a neon multi-coloured lighting system that gradually changed hue, and the latest in sound and projection technology. These innovations made it the best-appointed cinema in North Queensland. 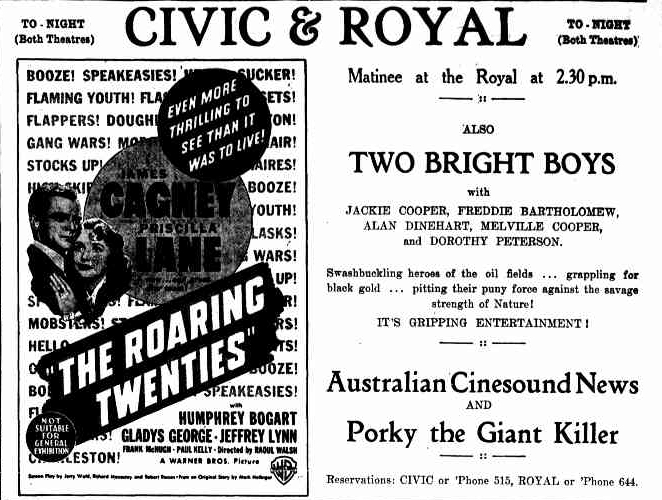 The Civic Theatre was officially opened on 16 September 1940 by local member for Mackay and Premier of Queensland, William Forgan Smith, who himself had made a substantial contribution to the spread of Art Deco architecture in Queensland through his Depression era public works programs. The opening was billed as a “gala premiere”. The theatre was decorated with large bowls of gladioli, delphinium and gerbera blooms, and the papers reported in detail on opening night fashions which included a black and gold metal frock, a rainbow striped net bolero, military pleats, and an ebony Chantilly lace and cyclamen silk velvet coat. On the same night, the Civic Milk Bar was opened as a further extension of the modern entertainment experience offered to cinema patrons. Operated by the Comino family who had been prominent in local business since 1906, the milk bar followed in the tradition of many American-style cafes in Queensland which were established by Greek migrants. They promised “cosy, restful cubicles” or “a convenient bar if you would prefer to stand”, with selections of “fresh chocolates in fancy boxes, or loose” and “delightful fruit and milk drinks”. 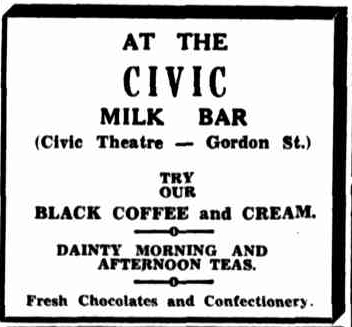 The Civic Theatre’s inaugural film program was headed by the picture My Son, My Son and included a featurette about the Academy Awards, with opening night proceeds donated to the local patriotic fund. Charity donations were a common strategy used by theatre proprietors to paint themselves as good community citizens at a time when moral opposition to the cinema was growing. Churches in particular were expressing concern about the infiltration of American slang into the local vernacular, the exposure of children to glorifications of crime and “illicit love”, storylines which challenged the sanctity of marriage, and the promotion of individualistic values of consumption, leisure and self-indulgence over thrift, hard work and charity. These debates raged in Australian society and were habitually played out in city and regional newspapers. On the occasion of the Civic Theatre’s opening, however, Mackay’s Daily Mercury came down on the side of cinema:

In these dark days of international strife, the motion-picture industry is playing a commendable part in assisting to maintain the morale of the people in providing relaxation from the grim realities of the times. (Daily Mercury, 21 September 1940, p.9) 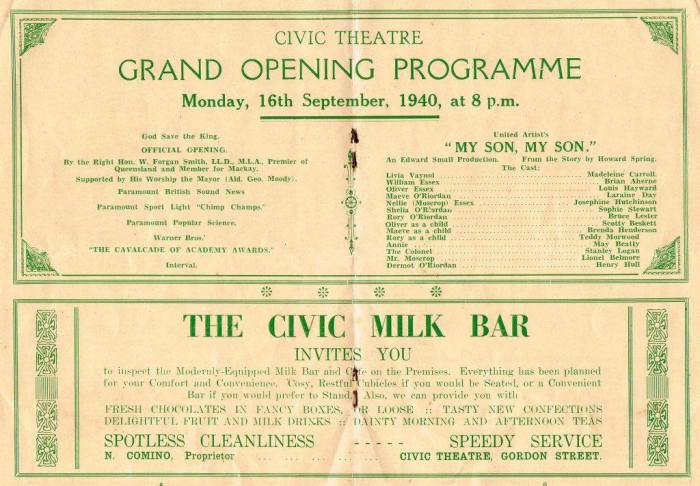 The Taylor family operated the Civic Theatre until 1972 when it was bought by Birch Carroll and Coyle (later Event Cinemas). It was refurbished in 1975 and reopened as the Mackay City Cinema, its Art Deco features concealed behind a remodelled facade and interior. There are reports of cinema staff who have glimpsed some of the building’s Art Deco traces beneath the present-day cladding, suggesting that while this history is no longer visible to most, it still lingers under the surface.

Thank you to Steven Pritchard, Research and Publicity Officer, Mackay Historical Society and Museum Inc., for his assistance during my research for this article.