This article is the fourth in a series of posts exploring the lost Art Deco cinemas of Queensland. See also: Brisbane’s Metro Theatre, Earl’s Court Rockhampton and Mackay Civic Theatre 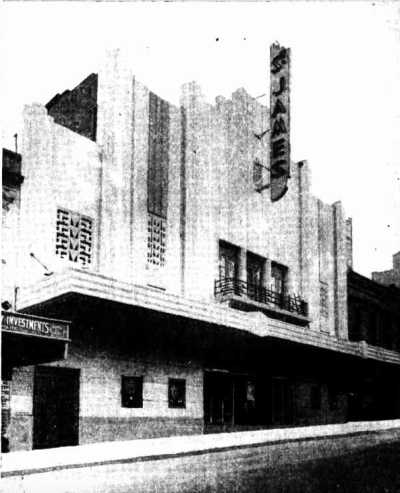 The St James Theatre in Brisbane wore many faces over its lifetime, beginning as a venue for vaudeville entertainment before re-emerging as a classically-fronted picture house, and finally, as an Art Deco cinema fit for the “golden age” of film.

In 1911, theatre proprietor Ted Holland opened the Empire Theatre in Albert Street, designed by prominent Brisbane architect H.W. Atkinson. The Empire became one of the city’s most popular vaudeville theatres for opera, musical comedy, drama and variety productions, and was also equipped with a projection box for the screening of moving pictures. 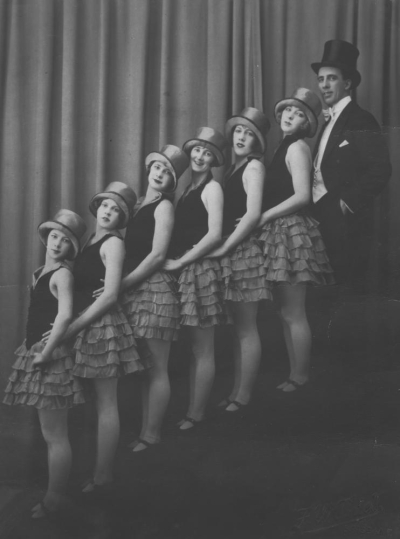 Two decades later, in 1933, the Empire became the St James, taken over by theatre entrepreneurs Sir Benjamin and John Fuller to add to their circuit of St James Theatres dotted throughout Australia and New Zealand. The building of a St James Theatre in Brisbane was originally touted in 1928 for an alternative site in Queen Street, with Fullers intending to retain the Empire as a venue for musical comedy. However, with the arrival of talking pictures and the onset of the Depression, the firm repositioned itself to focus more exclusively on film exhibition. This spelt the demise of the Empire and the rise of the St James in its place.

Although cinema designers in the western world were increasingly turning to the Art Deco aesthetic by this time, the St James Theatre sported a more classical exterior with a three-arched entrance. It is unclear from documents researched whether this exterior was built for the St James in 1933 or was a carry-over from its Empire days. Cinema architect David Frank Cowell-Ham ensured a modern treatment of the entirely remodelled interior, with lounge chair seating and a new projection room to accommodate films with sound. 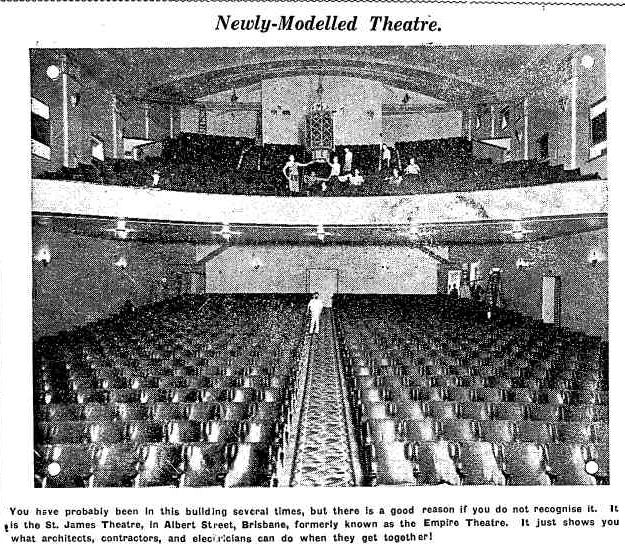 By the late 1930s the St James Theatre faced some worrying competition. In 1937, Metro Goldwyn Mayer (MGM) built the much-anticipated Metro Theatre directly opposite the St James in a thoroughly modern Art Deco style, complete with 42-foot neon sign and blue and amber light beams. At a cost of £130,000 (including an adjacent administrative building), the opening of the Metro represented a major addition to Brisbane’s entertainment scene. 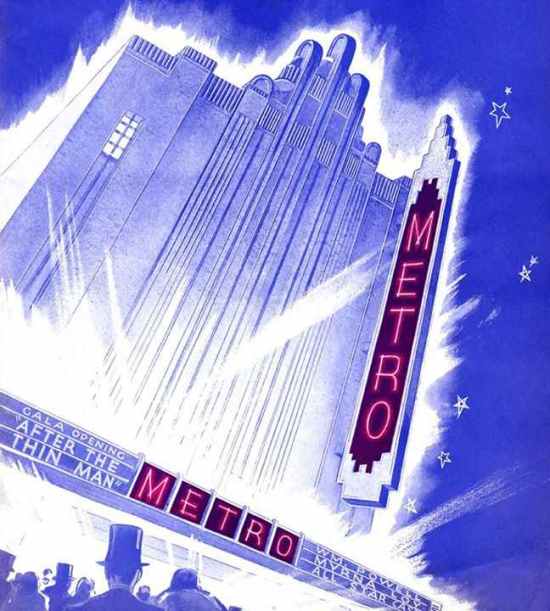 Although no exterior images are readily available of the 1933 iteration of the St James Theatre, it could only have looked drab in the shadow of the gleaming Metro, spawning a hurried renovation a mere few months later by then-owner National Theatres Corporation. At a comparatively modest cost of £15,000, the remodelled St James was described by one newspaper as “an old friend in a new, smart, modern dress”, perhaps designating it a different status to the Metro which attracted more effusive labels such as “luxurious” and “majestic”. 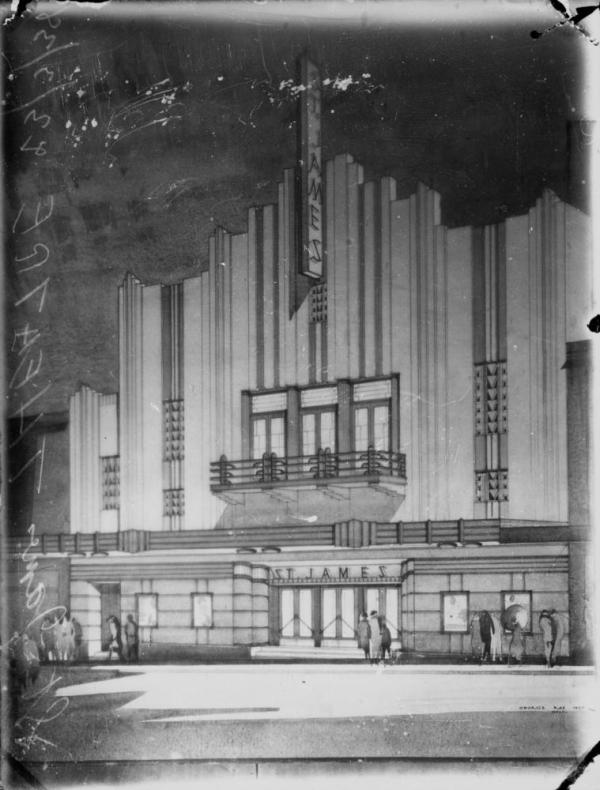 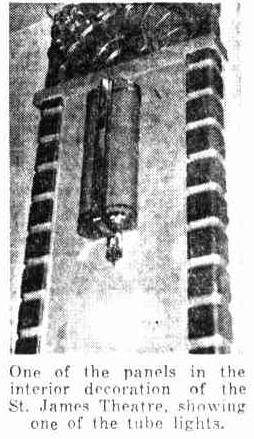 A case study in George Rae’s theories of cinema design

George Rae was born in Scotland and arrived in Brisbane in 1914, at the age of thirteen. Between 1919 and 1933, he worked in partnership with some of Brisbane’s most prominent architects including H.W. Atkinson (architect of the original Empire Theatre), A.H. Conrad and Lange L. Powell. By 1933 Rae was a leading architect in his own right, establishing a sole practice. 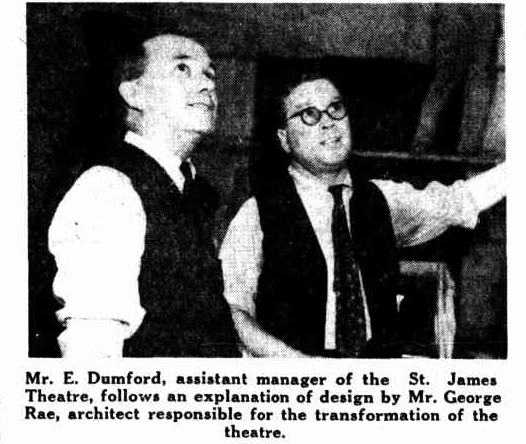 During the 1930s Rae designed and remodelled theatres throughout Queensland. In addition to the St James, other cinemas boasting the George Rae stamp included the Teviot in Boonah (below), the Rex in Laidley, the Savoy in Clayfield, the Astor in New Farm (now New Farm Cinemas), the Elite in Toowong and the Liberty in the Grange. Rae was also responsible for some of Brisbane’s most iconic residential apartment buildings including Carrington in Spring Hill, Highview in Highgate Hill, Casa del Mar and Green Gables in New Farm and Greystaines in Hamilton. 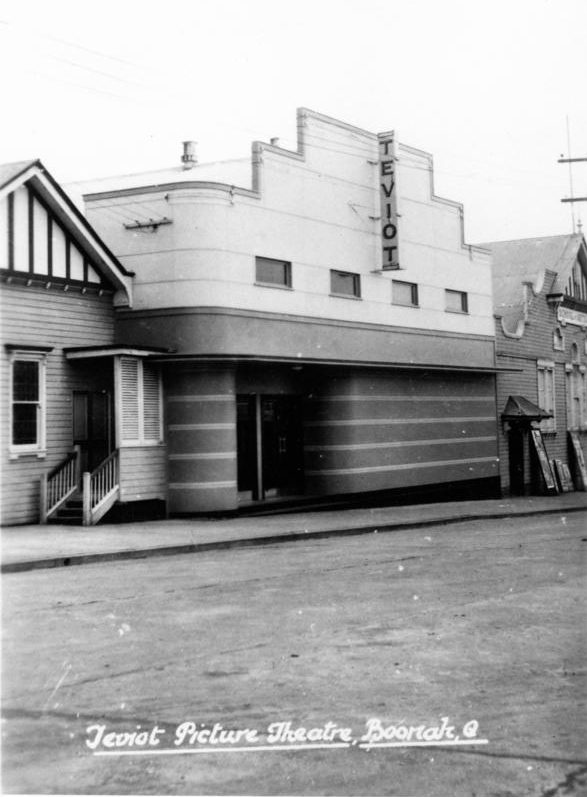 When it came to cinema design, Rae drew on values of modernity and science. In 1935 he explained his approach in a series of articles for The Telegraph, headlined “New Theatres for Old”. In keeping with the emphasis modernity placed on science, Rae believed cinema design could become an exact recipe with the adoption of modern style, materials and technologies. The remodelling of the St James into an Art Deco cinema demonstrated Rae’s theories in action.

1. The science of sound 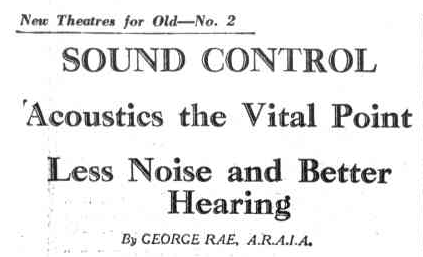 First and foremost, Rae believed that cinema design must prioritise acoustics given the explosion in sound films:

No matter how artistically perfect the interior, how satisfactory the ventilation or how comfortable the seating, people will simply not attend even the most outstanding productions unless they know they will be able to hear … without distortion and at a comfortable pitch. (The Telegraph, 22 January 1935, p.15)

Rae followed the mathematical formula of Professor Wallace C. Sabine, an American pioneer of architectural acoustics, to select materials and fittings with good sound absorption such as the fibrous plaster, cushioned seating and heavy floor coverings which were features of the remodelled St James Theatre. By consulting Sabine’s tables outlining the absorption factor of various materials and substances (including an imagined audience!), Rae was able to fulfil the theatre proprietor’s public promise to “achieve perfect sound production”.

Further espousing the scientific foundations of modernity, Rae believed that “the psychology of colour should also be studied in regard to both lighting and decoration.” He considered greens, blues and browns as “generally the safest to use in theatre decorative treatments”, as seen in the new St James Theatre which adopted a colour scheme of ivory, cream and green contrasted with accents of browns and blues.

Rae was interested in how colour could evoke particular feelings and responses in cinema patrons and be used in combination to achieve an overall atmosphere of restfulness and comfort. For Rae, the dominance of green in the St James Theatre would convey a sense of freshness, hope and cheerfulness, underscored by the truth and peace of ivory and the dignity, serenity and wisdom of blue.

The use of cool colours such as greens and blues also underpinned Rae’s belief that cinemas in subtropical climates must “look cool” and “be cool”. On the latter point, Rae wrote extensively about the ventilation options available to cinema architects, whether that be through natural or artificial means. Where budget permitted, Rae advocated the installation of complete air conditioning plants to create optimal climate conditions, and this was a celebrated feature of the remodelled St James. Advertising made special mention of this in a bid to lure patrons back from the popular Metro. 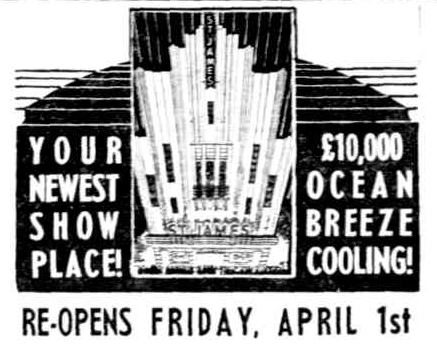 From opening to closing

The Art Deco iteration of the St James Theatre was officially opened on 1 April 1938, launched on screen by Lord Mayor Alderman A.J. Jones in a film made for the occasion. The cinema continued to operate as the St James until 1965, when it was renamed the Paris Theatre to coincide with the release of The Sound of Music. With this renaming, the cinema was repainted and French regency furniture added to the foyer, detracting somewhat from its Art Deco appeal. 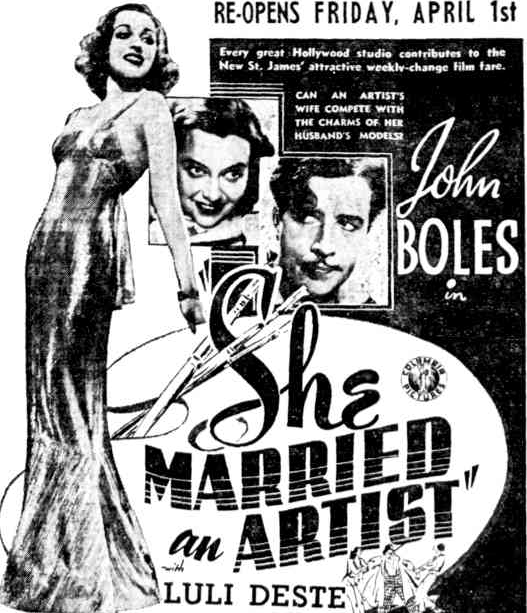 The theatre met its final demise in 1986 when it was demolished to make way for the Myer Centre development, which included a multiplex cinema – a new benchmark in cinema architecture which contributed to the closure of Art Deco and other single-theatre picture houses across Australia.

The following represents a small selection of references used.