The decorative elegance of Art Deco does not immediately call to mind something so utilitarian as rubbish incineration. But enter one of the world’s most pre-eminent modern architects, Walter Burley Griffin, and majestic form becomes imaginatively fused with functional necessity. This is exemplified in Ipswich’s stately Queen’s Park, where The Walter Burley Griffin Incinerator – known today as the Incinerator Theatre – boasts the distinction of being Griffin’s only architectural legacy in Queensland.

The story of Griffin’s time in Australia is a renowned one. Born and educated in America and working under the tutelage of Frank Lloyd Wright, in 1911 Griffin entered an international competition to design Canberra as Australia’s future capital. Winning from 137 entries, he moved to Australia in 1914 and spent the next 20 years of his life here, alongside fellow architect and wife, Marion Mahony Griffin. Although his vision for Canberra was never fully realised and he resigned from the project in 1920 after a series of bureaucratic frustrations, the Griffins’ impact on Australia’s built environment has endured. Together they worked on more than 250 designs for civic buildings, suburban estates, universities, cinemas, theatres, industrial buildings, houses and furniture. Their trademark aesthetic was a modern one independent of past styles, seeking harmony with the natural landscape.

In 1929, as the Great Depression ravaged the economy and the demand for residential architecture declined, Griffin established a partnership with a colleague, Eric Nicholls, to design incinerators for the Reverberatory Incinerator and Engineering Company (RIECo). RIECo had formed that same year to promote a new system of incineration patented by an Australian engineer, offering more efficient waste disposal that eliminated smoke and noxious gases. In addition, RIECo set itself apart from its competitors by promising municipal incinerator designs of aesthetic as well as functional value. This is where Griffin and Nicholls brought their skills to bear.

Of the thirteen incinerators Griffin and Nicholls designed for RIECo, only seven survive today including the Ipswich example. The Ipswich City Council called for tenders to construct an incinerator in 1934, the culmination of many years of political and community debate. As Ipswich grew in size, residents expressed a need for more modern methods of waste disposal. Newspapers at the time reported community concern about the health impacts of rubbish tips, described as ‘cesspools’ of bacteria. This was backed up by the Ipswich Health Inspector who raised concerns about vermin and chronic stenches emanating from local tips. A State Government loan was raised to cover the £5500 cost of transitioning to incineration, regarded more scientific and hence more ‘modern’.

However, settling on a site for the proposed incinerator proved contentious – in part a case of no-one wanting it in their own backyard. When Queen’s Park was initially identified in 1932 as the preferred site, 147 residents who lived in the vicinity signed a petition arguing the incinerator would become ‘a source of annoyance’, likely to produce an offensive odour affecting property values. The State Health Officer agreed, citing a park of natural beauty as no place for a utilitarian building. Council in turn rejected the State Health Officer’s suggestion of an alternative site near the North Ipswich gasworks, believing it too far out of town, instead settling in 1934 on the centrally-located Thorn Street quarry reserve in a close contest of six votes to five. However a year later, once RIECo’s tender had been accepted and work had commenced, things came full circle when the quarry’s foundations were deemed unsuitable to support the structure. After years of disagreement and delay, in what must have felt like a case of bureaucratic déjà vu for the local community, the original proposal – Queen’s Park – was revisited and finally endorsed.

Walter Burley Griffin’s design philosophy infuses the incinerator, in particular his belief in integrating buildings into the landscape in ways that respond to the inherent qualities of a particular site. In this case, the incinerator was built into the side of a hill, which not only respected the natural surrounds but also functionally supported the process of incineration. Trucks would back in towards an opening at the top of the building to dump rubbish, received by staff waiting (and sweating!) in the middle layer who would stoke it into a furnace below ground heated at 1200-2000 degrees fahrenheit. The reverberatory technique offered by RIECo meant rubbish was dried before burning, eliminating odours that local residents had feared and producing ash that could be reused in road and footpath construction. 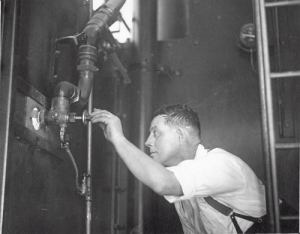 Griffin referred to his incinerator designs as ‘attractive social conveniences’, recognising they needed to have aesthetic appeal as well as fit into the natural environment. The Walter Burley Griffin Society heralds the incinerator projects as ‘transforming otherwise purely utilitarian function into sculptural elements in their landscapes’. Griffin took his design cue from the Art Deco style dominating modern architecture internationally at the time. In the Ipswich example, this is evident in the geometric simplicity of the overall structure, the contrasting decorative brickwork, the use of terracotta tiling for the roof, and most prominently, the chevron or v-shaped patterning repeated several times in brick and cream concrete. Despite initial reservations in the lead up, the final structure was praised locally for its beauty and elegance, the Queensland Times commenting:

…There has slowly been evolved a building that will enhance the architectural beauty of the city … The ugliness that is usually associated with chimneys … has been entirely eliminated, for it is wide, square and ornately figured with variegated bricks. (20 July 1936) 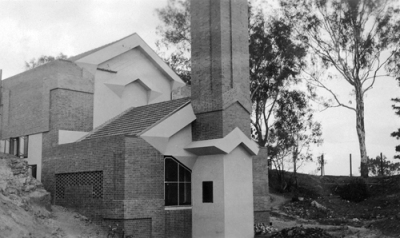 Simon Reeves, author of several works on the Griffins, suggests the story behind these incinerator designs is an even more personal one than simple architectural philosophy. In the early 1930s, the Griffins joined the Swiss-based Anthroposophy Society, a spiritual movement drawing on the teachings of Rudolf Steiner in extending the scientific method to investigations of the mystical world. In the case of incineration, fire became a locus around which science and spirituality merged. Expressed in built form, many of Griffin and Nicholls’ incinerators took on a church-like appearance. This reading has particular significance when revisiting the Queensland Times’ contemporaneous description of the newly constructed incinerator:

Solid brick and concrete forms the basis of the structure: the general appearance of which suggests a Moslem Temple or some other ecclesiastical edifice … (20 July 1936)

While architects of national and international acclaim have dominated this story so far, the project also had a local flavour. Construction was supervised by Ipswich architect George Brockwell Gill, potentially inspiring his own Art Deco design for the local Baptist church soon after. With the exception of fittings and fans, all materials were procured in Ipswich and surrounds, including bricks from Rylance Collieries and Brick Works and iron and steel work from Forrers’ Pty Ltd.

The incinerator took about a year to build and was opened with some fanfare on 5 November 1936 – fittingly Guy Fawkes Day. A few weeks before the event, in the spirit of regional rivalry, Brisbane’s Courier Mail mocked Ipswich for ‘cutting adrift from the orthodox’ by even entertaining the idea of an official opening:

…there is no precedent for ‘opening’ an incinerator, but as a key will not be necessary and it will be unnecessary to cut a tape, perhaps the council will content itself by committing to the flames the first shovelful of refuse. (13 October 1936)

Possibly as a retort, Ipswich Mayor A.T. Stephenson did all three, or close enough – he opened the building with a commemorative gold key, drew aside a large Australian flag to expose a foundation plate listing the names of council and engineering officials involved, and:

… took a hand at the stoking for a while, but the beads of perspiration that immediately broke out on his face suggested that he could think of a lot of jobs that were more pleasant. (Queensland Times, 6 November 1936) 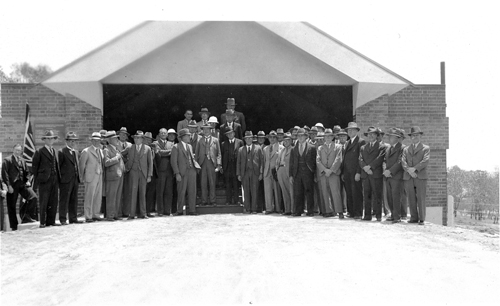 As for Walter Burley Griffin, he left Australia in 1935 before his design for the Ipswich incinerator had come to fruition, and died two years later in India without ever seeing it. In 1940 a second chimney was added by Griffin’s partner, Eric Nicholls, in response to the city’s rapid expansion.

By the 1960s incineration had fallen out of favour due to its environmental impacts and council considered demolishing the building. However, a community campaign saw it retained and converted into an intimate theatre space still enjoyed today as a popular site for local productions by Ipswich Little Theatre.

If you are inspired to seek out Walter Burley Griffin’s other incinerators, make a stop at Glebe (NSW), Willoughby (NSW), Canberra (ACT), Essendon (Vic), Hindmarsh (SA) and Thebarton (SA).

The Ipswich Incinerator was added to the Queensland Heritage Register in 1992.